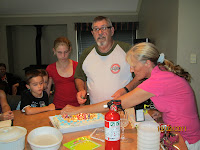 When we got home Vince's Mum told us that the family was coming for lunch at our place on the 20th to meet the girls and to celebrate Uncle Jacks birthday. Rae said not to worry, that everyone was bringing a dish and that we would not have to lift a finger. Well that was yesterday. It went so well and we did not have to lift a finger. So we would like to volunteer for these types of gatherings anytime :-). There was a great choice of food including chicken curry. The problem with all the curry dishes is the brown dog affect afterwards. Brown Dogs is the affectionate name for farting in Vince's family and some people are better at it than others. Uncle Jack and Deb cooked samosas which were so yummy when freshly cooked. I was able to share a special bottle of bubbly that I had and the women of the family wet the girls head with a toast and a promise to be there for them for advice, guidance and support. When everyone left there was only a couple of dishes to put away and a few chairs to put back in the shed. 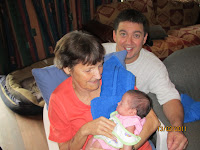 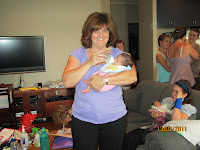 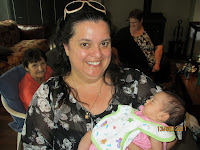 We were having such a great time catching up with everyone and showing off Willow and Taylor that we forgot one of our other babies. Spike the tennis ball marauder is a typical Kelpie. As long as someone is throwing a ball he will run all day. Yesterday that is what he did. There was a group of very enthusiastic kids willing to throw the ball and he was having a ball (literally). The problem was that we normally limit this to an hour or so because we know what he is like. Of course we never thought and he ran himself to the point of heat exhaustion and we almost lost him. Luckily our friend Louise noticed the change in him and called me. He then collapsed. He got worse and was incontinent and at times non responsive. We cooled him and gave him fluids slowly. We could not get hold of our vet. Mum called our friend Jude who is a vet and she was so great. Jude came over and checked him, gave him some IV fluids and sub cut fluids. By nine thirty he was back on his feet, albeit a little groggy and a little worse for wear. We are keeping him very quiet and hydrated. Being as tired as we were, we were very emotional and Jude was very comforting. We owe Jude big time.﻿ 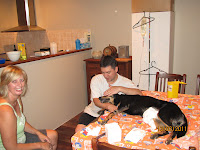 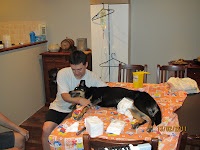 We also had a laugh because Spike was continually leaking urine while Jude was treating him. So Vince whacked a couple of the girls nappies under him and we all laughed thinking that we would never have drea﻿med that we would use them for that. As he began to respond to the fluids and became more aware of himself he was mortified that he was wetting inside. Poor Spikey. So after all the brown dogs during the day, it was our black dog that caused us the most grief. No balls or kongs at the next gathering!!
Life is never dull.
J.
﻿
﻿
Posted by Jeremy Moore at 9:50 AM 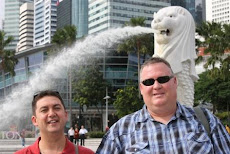 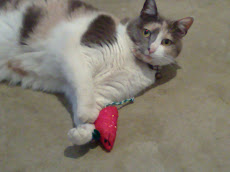 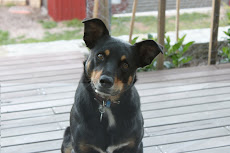 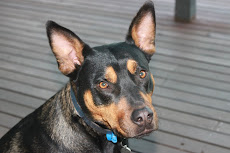